I started following Nurse Kelly’s blog the other day, Nurse Kelly: Health. Creativity. Joy., and ran across a post that brought up a similar memory for me. Her post was about seeing a homeless person in a sleeping bag on a church’s steps. You can read the post, Softer Steps, on her blog.

It reminded me of a something that happened in 1985 when our son Bran was seven. And though it wasn’t a huge event in the scope of the world, it was somewhat eye-opening to my family.

We were driving through downtown Ogden on the way home one Saturday when Bran said from the back seat, “Look! There’s a guy laying down on the sidewalk.” He was lying in front of the Egyptian Theater of all places. Lord Drollery pulled over and parked and we watched for just a minute to see if he was moving. People were walking past him and not even giving him a second glance. Finally we told Bran to stay in the car and we got out and walked over to the man.

He was breathing. He was dirty. Smelled like he hadn’t had a bath in ages, but there was no smell of alcohol about him, so we didn’t think he was just drunk. When we couldn’t rouse him, his lordship hurried up the street to the nearest pay phone and called the police. (Believe it or not there was a time when cell phones weren’t readily available and 911 was only in use in 50% of the states, Utah NOT being one of them. But I digress…)

First a patrol car came by and stopped, and within a few minutes, an ambulance. They checked his vitals and loaded him in the ambulance, and after giving our names and a few details to the officer, it was over. The whole episode took maybe 20 minutes.

The next afternoon I drove up to McKay-Dee hospital to see if I could find out anything about the man as they wouldn’t give out any information on the phone. He was in a room, and since there weren’t a lot of HIPPA regulations then about who could see whom, I was allowed to go in and say hello. His name was Johnny. We chatted for a few minutes, just long enough to satisfy my curiosity and make sure he was being taken care of, then I stopped at the nurses’ station and asked about him.

His name WAS Johnny from what they could ascertain, but they had no last name as he had no ID. This was not the first time he’d been brought it. As it turned out, Johnny was diabetic. I didn’t know anything about diabetes in those days; now, being type 2 myself, I know he’d been having a low sugar event, which meant he probably hadn’t eaten in awhile. The fact was, he could have lain there and died from insulin shock.

I walked out of the hospital that day thinking about all the people who had just passed that man by. In their minds I wondered if what they saw was just an old drunk. It made me question my own tendency to make snap judgements of people and situations. I like to think the experience made me a better person. And I know it had quite an impact on Bran, too. It was one of the reasons he was eager to go down to Imuris, Mexico and work at Casa de Elizabeth orphanage years later when he was in high school.

The take away? People and situations aren’t always what they seem. And a little bit of compassion can go a long way in making someone’s life better.

Pictures from Casa de Elizabeth, Imuris, Mexico…  (Couldn’t find where ours were posted on Google, but these are from another mission team that went there. You can read about it on her blog.) 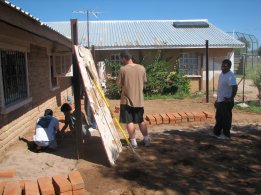