It’s been a week of ups and downs with Stef, Jesse, and the kids visiting. So many folks for them to see yet trying to squeeze in time for us to play with the kids.

Unfortunately our house is so small they have to stay with friends. But we’ve had a pretty good balance this year so far. Except for two Urgent Care visits…

Caleb (2 1/2) had a bad ear infection. Ethan (6) has strep. Close knit family that we are, the boys decided to share. Well, we think it was Caleb. So now Brandon and I are both courting sore throats, chills, coughs, and REALLY sloppy noses! Of course we may have gotten it from Lydia (1) who is coughing non-stop. So it hasn’t been the best visit for any of them.

Still we baked a cake and had a double birthday party for Lydia and Bran. The boys helped me bake and frost it. Then Ethan had this great idea to grind up some Oreo cookies and sprinkle on the frosting. One warning… If you’re going to do that, write on the cake first because the Betty Crocker icing you write with won’t stick to the sucker afterward! 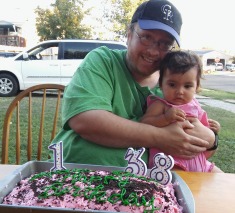 We had a big family get together so the kids got to see their cousins from OUR side of the family (they see Jesse’s relatives pretty often). Bran happened to overhear a conversation where Reese (8) was explaining to Liam (4) that they were cousins. Liam was quite agitated by her announcement and declared she was NOT and NEVER WOULD BE his cousin! (Do I hear echos of Star Trek in there?) Reese was broken-hearted. It took some highfalutin ‘plaining from Stef and Jesse to convince Liam that they WERE actually cousins.

And they were able to be at a little military program that Hospice did to honor my brother-in-law Greg who has lung cancer. It was just the neatest thing and the kids were caught up with the uniforms and the flag folding ceremony. I will do a post about it tomorrow. I learned some things about folding the flag I never knew.

So it’s been a good/bad week. But the kids are on the mend and we still have a few days with them before they leave on Friday. I’ll tell ya what, though. I’ve REALLY missed being on the blogs. I love all you crazy guys. And as I was trying to catch up tonight, I read a beautiful post on Mary Lou’s blog, Me In The Middle, about life and living. On that post she included a quote by Anne Morrow Lindbergh from her book “Gift from the Sea” about writing. I was so homesick for you all it made me cry…

19 thoughts on “The Good, The Bad, and The Snotty”