It’s almost December! Leaves have been raked, the turkey has been bought for Thanksgiving, and I’m getting out my Christmas decorations in preparation for switching from Autumn to Winter… I’m sort of OCD about decorations. Making the house look festive for whatever season it is is one of my favorite things. And I need the merriness of Christmas ambiance this year.

It’s been a hard year for us. Just when I thought I had gotten a handle on dealing with this autoimmune thing, I got sick on January 1st, dropped 60 lbs., and spent the next eight months going through various tests and procedures to figure out what was wrong, only to accidentally discover on my own that I was having long term side affects to one of my meds. Stopped that sucker and within three days my body breathed a sigh of relief and was pretty much back to normal. It was a long and wearing process, and we “donated” to every sort of doctor imaginable! (They, whoever THEY are, always tell you your golden years are the best. They lie. All of your “gold” is going to your doctors!!! 😦 )

In the end it all sorted itself out, but something else happened that has added another level of stress and anxiety to our lives.

In April some traumatic things happened at the store when our son Brandon works. The upshot was that it triggered something latent in him that causes him to pass out. He fainted three times at work, three trips to the ER. And in the middle of all that, his boss, who was about his best friend in the world, passed away quite unexpectedly exacerbating Brandon’s already scary issues. By then Bran was fainting at home as well. The worst time was when he fainted on the stairs and I didn’t find him till three hours later. He has also fainted while driving. That was about the last straw for me.

So he, too, has been through many heart-related tests to see what the heck is going on. But they all turned out great. We finally have a diagnoses, however. The cardiologist determined that he has Vasovagal syncope.

Vasovagal syncope (vay-zoh-VAY-gul SING-kuh-pee) occurs when you faint because your body overreacts to certain triggers, such as the sight of blood or extreme emotional distress. It may also be called neurocardiogenic syncope. The vasovagal syncope trigger causes your heart rate and blood pressure to drop suddenly.

Unfortunately it’s not a medical condition they can do much about except try to get to the root of the anxiety (which on the surface seems plain enough to me and his nibs), but in the meantime he must be very careful when he stands up and especially going up and down on stairs. And he has not been released by the cardiologist to drive. He has been on medical leave at work since May and the counselor feels it would not be a good idea for him to go back to work there. As of now he is seeing a psychologist weekly to try to help sort this out. Unfortunately it is a slow process and involves some PTSD counseling. And in the meantime, he’s still fainting. Three times in the last four days, once on the stairs again when we were not home.

His not being able to drive has complicated our lives. He’s been looking for another job for weeks now, and this morning he was offered one at the county behavioral health depart. Unfortunately he had to turn it down because there was some driving involved in getting patients to appointments, and their insurance would have seen that as a liability since he has passed out driving. Right now he’s feeling pretty useless. He is so unhappy and depressed, and feeling guilty because we are having to deal with his bills and insurance. And no matter what we say to him, we seem to be unable to alleviate his feelings about it all even though he knows we support him 100%.

Needless to say the situation has made both his nibs and me very hypervigilant 24/7. I’m finding it takes me all day to do what I could do in a couple hours around the house every day. And Brandon is a talker! So I have no personal space these days. I have been unable to concentrate to read, journal, or do a blog post, or even follow you all on your blogs. I feel like I’m losing touch with who I am. I’ve always used journaling to keep me sane. I miss it something fierce.

To that end I had to made two decisions yesterday. I bought a monthly planner that has quite a bit of space to write daily comments and notes. That is basically how I began journaling years ago. (I have 44 completed journals of all sorts!) So I’m going back to basics to see if I can find my rhythm again. The other thing is I need to stop longing to be back on the blog and feeling guilty that I can’t focus enough to do that.

So for right now I’m giving myself permission to take a “leave of absence” and stop feeling pulled in two directions about this. I know me, however, so don’t be surprised if I pop up on your blogs now and then. I so don’t want to lose touch with my friends on here. I am leaving my blog up, so if you ever want to drop me a note you can do so. I miss you guys more than I can say. You all feel like family. But in the words of someone dear to my heart, 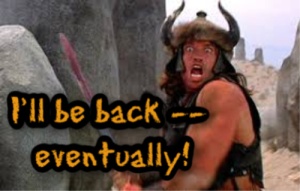