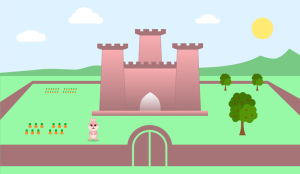 Ok, so his nibs and I signed up for this class on boundaries. With our son living at home and not working at the moment, it sounded like a helpful concept. It’s difficult for us (me especially)  to hold on to the fact that he’s not 12 anymore (though you couldn’t tell that by his room!), but we NEED to remember that and set some adult-type boundaries (which we have no clue how to do). It’s a big class, 15 people besides the facilitator. It requires breaking up into small groups of three for some discussions. His nibs HATES that. I’m a talker, doesn’t bother me at all!

We went to the first class last Wednesday night and it was a little weird. It’s was a hard subject for me to get my mind around. But where the trouble really started was when got the participant’s guide out to do the homework. The first set of questions totally befuddled me.

1. Think of a time when you stuck by your boundaries and people respected you for it. What were the circumstances? Why were you able to maintain your boundary?

Imagine a blank but puzzled look emoji here… In trying to come up with an answer for those questions, I realized I wouldn’t recognize a boundary in my life if I tripped over it! I have pondered those questions for a whole week now and have done NONE of the homework. Tomorrow is session 2. I did, however, come to a startling reality: I don’t think I HAVE any personal boundaries. 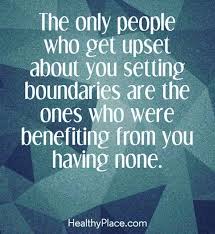 I think when his nibs and I tied the knot 48 years ago the culture was that married couples became a team. They shared household responsibilities, finances, babysitting, etc. And that’s the way it’s always been for us. The problem is, being the lazy lout that I am, I think I let his nibs do all the boundary setting. So now when I look back I sure can see where I needed some of my own in the worst way — at home, at work, at church… (We’ve never really been fighters, but I suspect having my own boundaries may have changed THAT equation.)

What I realized was that I could see them in HIS life, but not mine. One example stands out to me. When he was working as the CFO for a previous employer he’d been with for nearly 25 years, the employer asked him to do something that bordered on the edge of being illegal financially. His nibs said “no”, and within a few weeks he was let go. They stressed at the first session that no matter what the circumstances you always have a choice. His nibs took umbrage at that because he knew that had it been something NOT illegal or (at the very least unethical) he probably would have done what his boss wanted. After all, he had a family to support and needed that job. In all likelihood he wouldn’t have said no because he would have felt he had no choice. He needed the job. But knowing he would be breaking the law was a whole different matter.

So tomorrow is the class and we’re trying to decide whether this will be helpful for us or not. Or if they might even “break” something that can’t be fixed! We both feel this may not be helpful to us with Brandon. I am disappointed. But I guess talking one-on-one with a counselor might be a better solution anyway.

Have any of you ever read “Boundaries” by Dr. Henry Cloud and Dr. John Townsend? If so, what was your impression of it? Or even did you feel like it helped?

Personal boundaries are guidelines, rules or limits that a person creates to identify reasonable, safe and permissible ways for other people to behave towards them and how they will respond when someone passes those limits. It’s where I stop and someone else begins… (Wikipedia)

17 thoughts on “What the heck is a boundary anyway?”